I have been doing a study lately over some women of the Bible, and I came across the story of Sapphira.  I love places in Scripture where God moves in powerful ways to instill a lesson and this story tops the list!

Ananias and Sapphira sold a piece of property and brought the proceeds to the apostles, but held back a portion for themselves.  They both end up perishing and fear spreads through the church after hearing of their deaths.  At first, we think that their sin was about withholding from the Lord, but I want to challenge you to think more deeply about the text.

Remember when you are reading that the Chapters and Verses are there to help us, but not constrain us.  If we step back we can see how essential it is to read Acts 4:36-37 with Acts 5:1-2.

The Root of Their Sin

After reading all these verses, we realize the root of their sin was comparison.  Ananias and Sapphira were not trying to honor the Lord with their sacrifice and offering, they were trying to compete with Barnabas.  Scripture shows us this clearly in Acts 5:4 when it says, “Wasn’t it yours while you possessed it? And after it was sold, wasn’t it at your disposal?”

Peter is exposing their true sin of comparison. They could have done whatever with their land and their money as it was a blessing God had given them. Their sin was not holding a portion of that back. Their sin was seeking to impress others and receive worldly praise instead of heavenly praise.

Whose praise and attention are you seeking?

Are you looking to impress your spouse, to show up a friend, to be the center of attention at work?  The answer to that question is revealing.  While we each have unique talents and abilities that bring glory and honor to the Lord…we are actually not that special. Ecclesiastes 1:9 says it this way, “what has been is what will be, and what has been done is what will be done; there is nothing new under the sun.”

My talents and accomplishments have likely been done before.

The things I would like to impress others with have likely already been witnessed.

Take comfort, not in thinking less of yourself, but in the reality that there really isn’t anyone to impress. God is already impressed. He created you and gifted you, and He is watching, leading, guiding, protecting, and refining.  He is the one who will change us and fill us with the confidence to be who He has created us to be.  When our focus is on Him, it can’t be on ourselves!

The Opportunity to Repent

God gave Sapphira a chance to reflect, to change her tune when she was questioned by Peter, but she didn’t.  Isn’t that the case with us too. Often in reflection, we are able to recognize our pride and self-interest, but at the moment we might miss it.  Sapphira was given an opportunity to step forward and say, “actually we did hold some back for ourselves but we wanted you to think we gave everything,” but that is not what happened. She pressed forward in their scheme and suffered the consequence.

Don’t push forward in your comparison.

Don’t continue to measure yourself against another.  Put away your social media, stop your negative self-talk, and practice gratitude. Comparison leads to death, an emotional and spiritual death.  When you compare, you are diminishing the great and glorious gifts the Lord has given you…specifically you.  He has given you everything you need to accomplish all He has called you to.  Stop comparing yourself and live the life God has given you.  Treasure and enjoy the people God has surrounded you with.  Appreciate and share with them the gifts He has given you.  Bless and witness to those around you.  Be you!

If Sapphira would have been able to admit her mistake and share her selfish motivations, she would have been able to provide a different type of testimony for us to follow.  She would have likely been corrected and encouraged by Peter and of course, forgiven by God.  Confess and repent of your own need to compare and let the forgiveness of God wash over you.  Don’t let the tide of comparison carry you away.

Erin Carlson is the Kid’s Director and oversees women’s programming at Keystone Church.  She enjoys studying the Bible and presenting truths to women that are practical and applicable.  As a mom herself, she treasures opportunities to speak truth and encouragement to women as they navigate their role in parenting. 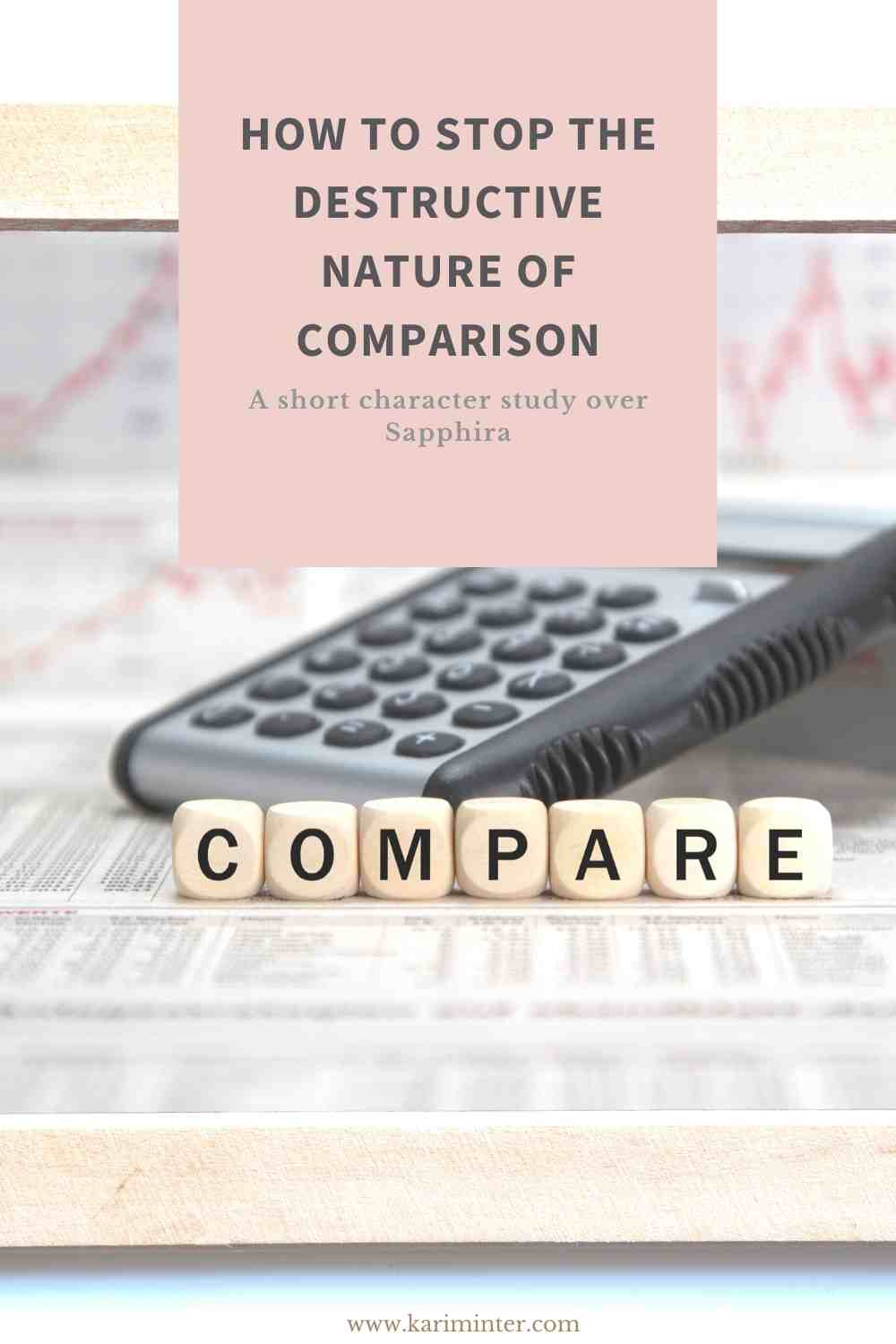 Get instant free access to my newsletter where I share my best tips resources to grow in Christ.