Sometimes we jump into the Old Testament and aren’t sure exactly how the stories relate to our life. But remember, the Bible is a story about God. If you read it with God as the central character, suddenly what you learn about God can be applied to every area of your life.

Take 1 & 2 Samuel for example. In the midst of reading about the history of Israel’s king and the stories of Saul and Daniel, you can learn such rich wisdom about how to walk through life.

In 1 Samuel 9, we are introduced to Saul, God’s solution to Israel’s desire for a king. Saul is described as “an impressive young man.  There was no one more impressive among the Israelites than he.  He stood a head taller than anyone else.” Saul was obviously an impressive man destined to be great.

He was anointed king, given the Spirit, won battles for Israel, and became a powerful man.  This outward strength makes the perfect backdrop for the catastrophe that occurs as Saul turns away from God.

Eventually, Saul gets tired of waiting on God.

He gets confident in his own abilities and strength. He then starts to listen to himself more than he seeks God.  These heart attitudes culminate in chapter 13 when Saul takes it upon himself to offer burnt offerings to inquire of the Lord.  Saul panics in a time of war and starts to assume his authority as king gives him authority over all things in life.

But this is not God’s plan.

We should read this and be encouraged to stay in the lane God has given us.

As Saul’s downfall began, God ordained a new king over Israel.  A king who will have to wait close to 30 years before he sees his anointing come to fruition.  But it is in these 30 years, one sees the importance of humility and trust in God if order to be a godly leader.

David was a child still tending to sheep when Samuel shows up to anoint him king.  But just because he was anointed does not mean David immediately became king.  Instead, we see him grow up and watch God turn his heart toward God until we see the famous battle where David bravely fight Goliath stating, “the Lord who rescued me from the paw of the lion and the paw of the bear will rescue me from the hand of this Philistine.”

Saul: Unrestrained by God vs David: Humble and trusts God

Throughout the rest of the interaction between Saul and David, Saul continually tries to kill David. David continually states “I will never lift my hand against him since he is the Lord’s anointed”.  Unlike Saul who was unwilling to wait on God to act in God’s timing, David was willing to trust God and wait however long it took for God to act in David’s favor.

We should be very aware of the need for humility and trust in God if we want to be a good leader.

Society tells us every man for himself. But the scriptures show that only when David was willing to be patient and wait on God, did he become a good leader.  Leadership is a gift from God that requires humility and dependence on God. Throughout the New Testament, we notice the importance of humility as we read statements like, “Humble yourselves before the Lord, and he will exalt you.”  Saul and David clearly show this Biblical principle to be true.  God does not exalt the proud. Those who are humble and trust in the Lord will be exalted, in whatever way God seems is best.

As David waited to become king, he endured years of suffering at the hand of Saul.  Several times Saul tried to kill him and David had to flee.  David lived in caves, in foreign cities, but then even the foreign cities started to banish him.  He had nowhere to call home, but yet he knows he was called by God.  We see the anguish this causes in his soul as we read the Psalms he wrote during this time of suffering.

In 1 Samuel 21, David comes to Gath looking for a place of refuge.  But his place of refuge turns on him.  In desperation, we read David cry out to God and say, “Be gracious to me, God, for a man is trampling me; he fights and oppresses me all day long.  My adversaries trample me all day…” David has done nothing to deserve this treatment, but yet he is suffering greatly.

His response to his suffering is what is worth noting.

Right after crying out to God, he states, “When I am afraid, I will trust in you.  In God, whose word I praise, in God I trust…” David’s suffering produced a tremendous trust in God.  As he fled for his life, it became very clear the only one who could be trusted was God.  David’s suffering was used by God to draw David closer to God.

We can take comfort in this truth.

Suffering can always be used to draw us closer to God and for God’s glory.  In fact, 1 Peter tells us to rejoice in our sufferings because “even though now for a short time, if necessary, you suffer grief in various trials so that the proven character of your faith—more valuable than gold which, though perishable, is refined by fire—may result in praise, glory, and honor at the revelation of Jesus Christ.” Our suffering increases our faith and produces in us the righteousness we desire.  We would do well to not avoid or despise suffering, but instead, look to David and the man of God he became because of his sufferings, and embrace the suffering God brings to our life.

The Old Testament offers us such a wealth of lessons and examples of how to follow God through all of life. Jump into the Old Testament for yourself and see all God opens your eyes to. 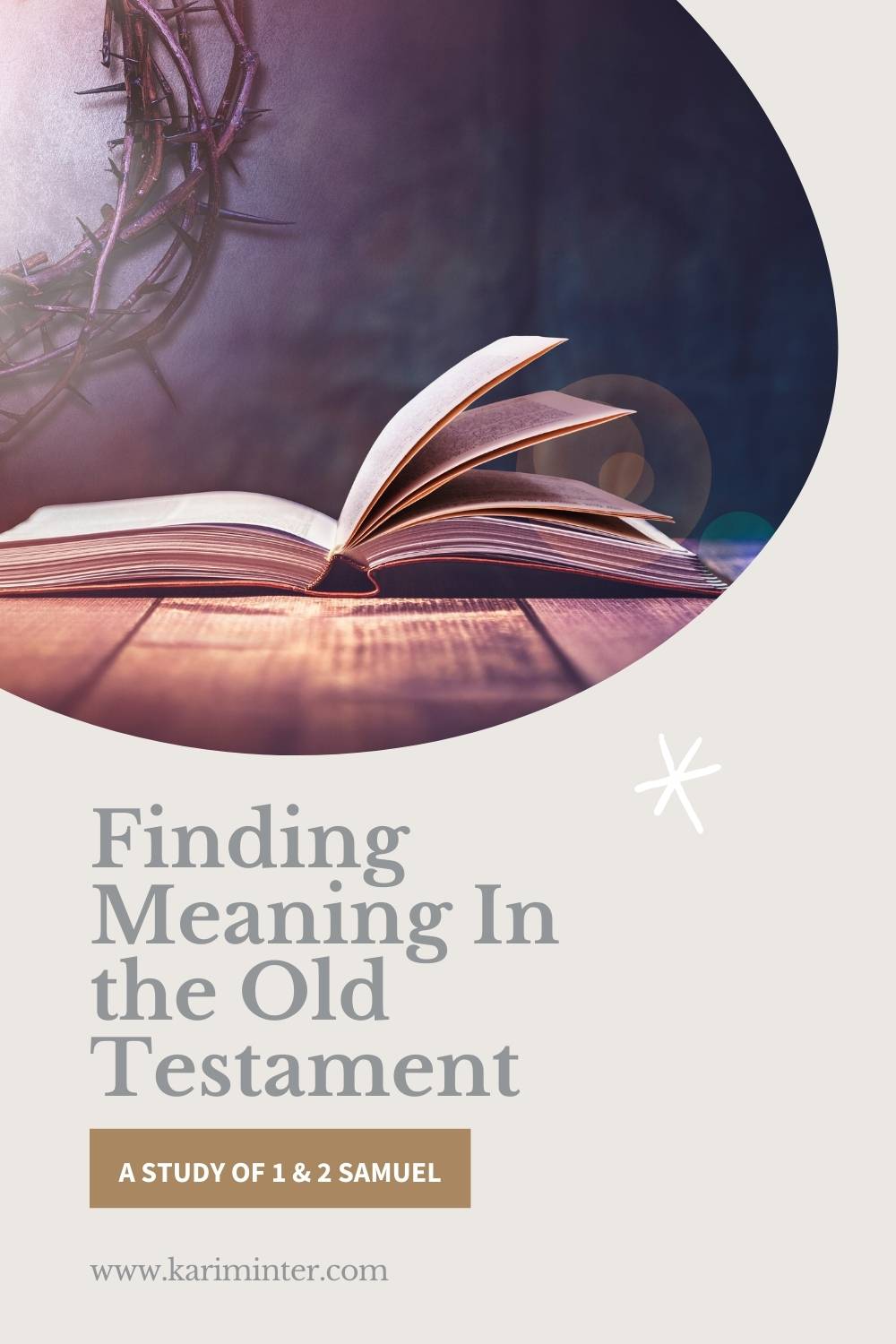